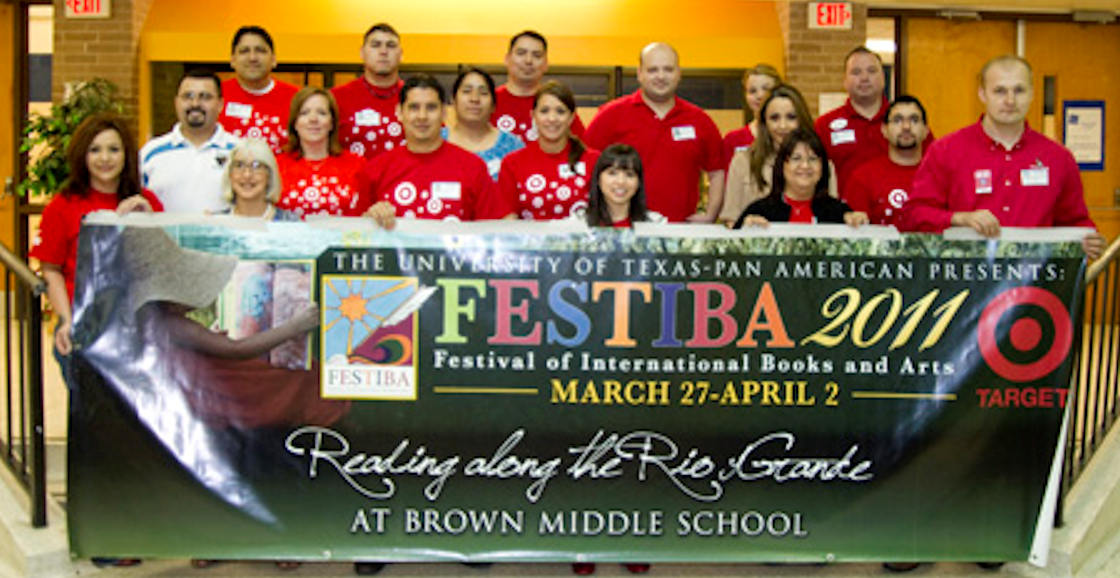 The following article was first published on the UTPA news site on April, 2011. The original page can be viewed here.

Nearly 200 students at Brown Middle School received not only a free author-signed book but a high five from red-shirt-wearing Target employees as they exited the school’s cafeteria March 31.
In a new partnership developed with The University of Texas-Pan American’s FESTIBA (Festival of International Books and Art) Week, Target funded the purchase of more than 300 copies of the book titled “Borderlines: Drawing Border Lives (Fronteras: dibujando las vidas fronterizas)” for students and/or libraries at Brown and Lincoln Middle School in McAllen.

FESTIBA is an annual event the University sponsors to promote an appreciation of arts and humanities as well as reading in order to improve students’ success in school and in life.
Roxie Acevedo, store manager of McAllen’s Nolana Avenue Target store, said the company first got involved in the 2010 FESTIBA activities on campus and saw the tremendous impact it had on the community. Last year, Target had launched its own literacy awareness campaign called “I Pledge” with a focus on early childhood reading. This year, Target wanted to bring FESTIBA out to the community at schools, she said.

“Literacy is very important and this is a great event to celebrate reading,” Acevedo said.

Directed at English Language Learners, the book the students received features 25 portrait drawings of people who live and work along the U.S.-Mexico border with bilingual poems that have been inspired by each of the drawings. The book is a collaboration between Dr. Steven Schneider, UTPA professor of English, who is an author and poet, and his wife, artist Reefka Schneider, who draws in charcoal, conte crayons and pastels.

During a presentation prior to the book distribution, Schneider showed a video regarding their joint work and later described the subjects of some of the portraits before the complementary poem was read in English and in Spanish for the students.

“Poets have always been interested in art,” Steven Schneider told the students, telling them he was influenced by an early mentor who wrote a series of impactful poems in response to a number of famous Impressionistic paintings.

Reefka Schneider describes her work as a way of honoring the people of the Valley. She talked to students about creativity and the challenges that come about in the creative process.

“Everyone has a reservoir of creativity inside of them. You start out with something rough and the art is in the revision,” she said. “What we put our attention on gets stronger.”

She equated the process to perfecting her art to a process a student might go through trying to read a new book that they might find difficult or a different genre than they normally read.

“Give yourself time to adjust to that book and author,” she said.

Steve Schneider, who helps coordinate during FESTIBA Week the Target Community Literacy Program and Texas Book Festival’s Reading Rock Star Program, which also sends authors and free books into schools, said it’s special for students to meet an author and be able to ask him or her questions in person.

“They get to hear the author’s voice and learn about their lives. This type of direct experience is invaluable and often sparks greater interest in reading and in that author’s work,” he said.

Acevedo said Target chose the Schneider’s book because it closely represented the border community. “It represents who we are. This is a book you can read to the students and that person (represented in the book) may be their uncle or may be their cousin. It is our everyday life. It is also a great book for those students learning English because the poems are in English and in Spanish,” she said.

Acevedo said it is critical that corporations like hers support students and education.

“These are our future leaders. One of the things that I love about Target is that we give 5 percent back to the community. And you get to see the impact we have when you see the look on a child’s face. For some of these events, it is the first time they are ever going to get a book in their whole life that they can take home,” she said. “Sometimes the small little gesture that we do has a huge impact and goes a long way.”

Hanging on tightly to her new book, eighth grade student Lorena Martinez said she liked that the book reflected both the American and Mexican cultures and that it was written in both English and Spanish.

Jessica Palacios, 14, also an eighth grade student, said she reads “a lot” and is currently writing her own book on a girl and a boy finding love, an idea inspired by other books she has read. She said it is important that people her age read.

“It (reading) helps us understand what other people feel,” she said.

Brown Middle School assistant principal Maria A. Chapa said the school was honored to have been selected by Target for its distribution. She described the majority of her students as recent immigrants or first generation well versed in their native language of Spanish but many having limited English proficiency.

“We have to help them make the transition to English,” she said. “Having the authors come here promotes reading … we want to make sure that the students love to read.”

Chapa also expressed her appreciation of Target’s interest in the students.

“To have the community buy into our institution, that is exceptional. They are really setting a precedent for our future,” she said.

“By making this commitment, Target and the Texas Book Festival show the community that reading, literacy and the arts are important to the well-being of our community. Moreover, a well-educated work force can contribute to raising the quality of life for the entire region,” he said.